While the Book Arts Collective is now taking a Summer Break, there are plans afoot for September.


Have your heard of the Blue Monkey Network?  They are an artists group, based at the Towner Art Gallery in Eastbourne.


Dorry is pleased to announce that Blue Monkey has invited her to give a talk at the Towner on Wednesday 21 September, 6.00 pm to 8.00 pm.  The Towner Gallery is at Devonshire Park, College Road, Eastbourne, BN21 4JJ.  These events are for members of the Blue Monkey group, although they have very kindly offered you, the Book Arts Collective group, free entry.


Dorry will be introducing the group to her practice as an artist and taking along some samples of her work.  Come along and enjoy the evening!


Following this event on the Saturday, Vanessa Marr will be running a booky-arts workshop so everyone can try out their own version of making some book art.  She will be at Dorry's talk, and invites other artists to bring along their own work to display for everyone to enjoy during the evening.


As you can tell, this is going to be a good event with loads to see, and you can take part too!
Put a note in your diary, on your calender, on the back of your hand, to come along.  If you do wish to join us for the evening, please contact Dorry at collectivebookart@gmail.com so that you can be put on the list of visitors.
Posted by Unknown at Friday, July 08, 2016 No comments:

We were delighted to have Vanessa Marr back, this time showing us all how to make Double Accordian Books.  Similar to the concertina style, although using double the paper to create a wonderfully folded book form, with boards at each end.  Good fun was had by all, choosing colourful and interesting papers and ephemera, gluing, stitching and covering their book boards.  Most people completed their books, although a few took home their book boards for gluing on the ends at a later stage.


The session was well attended and the display at the end showed the varying style of what people have come up with, all being different based, of course, on personal choice.


Sorry that I am not able to put any images on here at this time!  Hope to do that soon.
Posted by Unknown at Friday, July 08, 2016 No comments:

Wonderful morning again with Vanessa Marr leading our Workshop on 5 March.  There were ten of us seated around and we soon got to work cutting out pieces to use for our Star Books.  There is quite a bit of juggling to do on them, especially with glue.  We made board covers for our books, covered them in book cloth (more glue) and added ribbons.  Great fun was had by all.  The two hours went by in a flash and many of us took hope what we had up till then and continued at home.

Saturday morning saw those of us in the bookart-o-sphere who wanted to make Dos-a-dos books gathered together at Phoenix Gallery. Vanessa Marr was our inspirational, and very patient, Tutor, and we almost all managed to complete a handmade book, with others finishing off at home with most of their work already done.


Vanessa teaches at the University of Brighton as well as running other courses, so had all the know-how for us.  She provided some brilliant handouts and masses of lovely papers, and then we began.....


We chose the card for our cover and cut it to the size we wanted for our finished book, folded it into 3 and then chose the paper for our contents pages (known as 'signatures' in the book art world).  As lots of measuring and cutting went on it became very quiet as people were concentrating, and making precision folds to ensure their books would be beautifully neat and tidy.  Vanessa had a wonderful tiny guillotine which she brought along, passed on to her by her father, so technology of the old-fashioned and very useful kind, was present!


Excitement and joy set in quickly as we could see our work coming together, and some of us were already allocating in our heads future dos-a-dos books to give various people as presents, or travel journals and the like, made for ourselves.  So many dos-a-dos to do, and so little time! What a fun time we all had, reminiscing about being back in childhood, in a group, making something special together.


Once all that had been achieved, we then approached the stitching together of the cover and the signatures.  Expert bookbinders do lots of amazing stitching, and we had insights from Vanessa about the best way to stitch our books together, with linen thread.  It's 'watch your fingers' time, as there are tiny holes, made with an awl, to go through and come back out of again. Much sewing took place.


Sense of achievement!  We all put our books together in the middle of the table, and there we saw our varied and interesting selection of the handmade book in action.


WATCH OUT FOR MORE NEWS ABOUT ANOTHER, DIFFERENT WORKSHOP WITH VANESSA IN THE NEW YEAR. COME AND JOIN US FOR A MARVELLOUS WAY TO SPEND A SATURDAY MORNING.  News of this will be posted in all the usual places.
Posted by Unknown at Saturday, November 21, 2015 1 comment:

Following on from our meeting on 7 November, we have now established the work which will go in to the Book Art Show at Phoenix Gallery, Brighton, so that is an exciting move forward in preparation for 15 May 2016.  Thanks to everyone who responded to the initial email and then attended the meeting!

Drop in Workshop on 21 November making Dos a Dos books with Vanessa Marr.  Lots more information on our Facebook page ...    See you there! 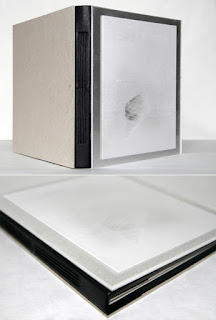 We had a wonderful Saturday morning on the 3rd October. First, Karin Mori from Phoenix Gallery (www.phoenixarts.org) came along and told us all about the Book Art Show called Press & Release 2016, Technology and the Evolution of the Artist's Book, curated by Maddy Rosenberg, which will involve Curious Projects, and Liberatura.  The Sussex Book Arts Group has been also invited to take part in the activities associated with the show on the 15th of May 2016. There is a  design team to be commissioned, who will work on creating an environment where the book art work chosen for the exhibition will be presented in an interesting way, and the show will seek to push the boundaries of the book as object. Sussex Book Arts Collective has been invited to create an event in one of the spaces available and we are at the planning stage.   Ideas are being collected by Dorry so that they are gathered together for discussions.   There will be a meeting on 7th November 2015 to decide more ....

Mariya Ustymenko then presented a fascinating and interesting talk about her work Fear of Disappearance and how it all started.  She had been developing the levels of her project since September 2014, taking a good 6 months to work through the ideas to the finished work, having initially applied for a residency with the bookRoom Press, UCA Farnham. She passed around her completed book, some zines made similarly and more afford-ably, and her portfolio.  Her work is also currently on show at The Gallery at Willesden Green Library as part of the group exhibition by Walph Collective titled Making Space, on view till the 4th of November.

The work had 3 outcomes: a limited edition (40 hand-bound books with perspex and aluminium cover), a zine (ed. of 100, hand-sewn soft-cover pamphlets), and a concrete, perspex and steel sculpture (ed. of 3). 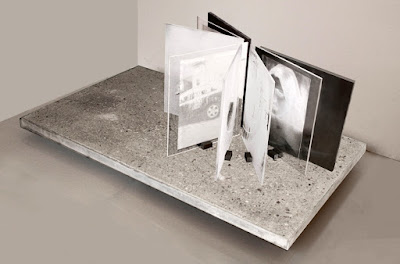 Mariya explained that she is a lens-based artist mainly, and is part of a photo collective group which provides peer support and mentorship.  Her background includes a PhD in Literature which she achieved when living in Essex before moving to the London area.

The contrast between the city and places by the sea had given her thoughts about the urban environment and how she might structure her book and sculpture taking on a subjective approach.  This led her to use urban materials to convey her ideas, such as concrete, steel and aluminium, which these environments are filled with, and which gave her choices about ways of production not usually associated with books and photography. 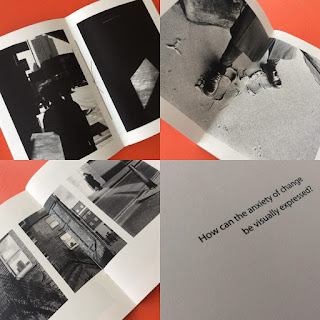 The project also raised questions about her anxieties.  In a rapidly changing environment, she considered whether the book could be viewed as architecture, especially looking at such areas of London as Whitechapel and Hackney Wick.


On the question of development of the electronic book market with its greater digitalisation in the 2000s, she felt that this was often more for mass market paperback readers, and the artists book was more sought after now as they are physically more attractive and show greater creativity.

Mariya completed her splendid presentation talking about how she could see herself in the future doing more experimentation with paper folding, and laser engraving on different kinds of papers.
Posted by Unknown at Sunday, October 04, 2015 2 comments: 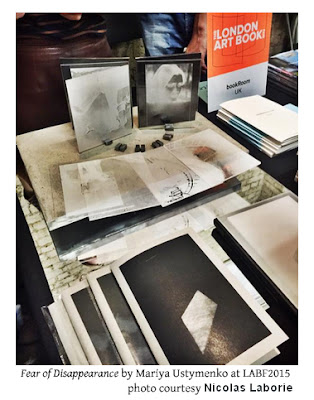 Here's the latest greatest news for everyone -
BOOK A REMINDER IN YOUR DIARY FOR SATURDAY 3rd OCTOBER 2015 AT 10.30 to 12.30-ish in the Green Room at the Phoenix Gallery, Waterloo Place, Brighton.

We kick off the New Season of the Sussex Book Art Collective with a presentation from one of our members, who has recently featured her work at the Whitechapel Gallery, London Book Art Fair.  Mariya Ustymenko is a regular attendee at the SBAC meetings and many of you will already know her.  She will share with us her insights into developing her mixed media project, from her earliest ideas and sketches to its final outcome.  How exciting!
Find out all about this process, which led to her finished piece of work and get a behind-the-scenes glimpse of how an accomplished artist brings about and shows a completed project.  Mariya Ustymenko has been invited to talk about her sculptural photobook project, Fear of Disappearance.
She says of her work -


Fear of Disappearance is dedicated to the fast-changing landscape of London.  Supported using public funding by the National Lottery through Arts Council England, the project was developed under the guidance of the bookRoom, a research cluster based at the University for the Creative Arts, Farnham, with focus on digital analogue and hybrid art book formats, and Akina Factory, a London-based photobook orientated laboratory.


All welcome, from more experienced creatives to those of you who are just curious or are beginners.  As you can tell from the description above, there will be lots to learn and see in our friendly and welcoming group session, and you can met other creatives, have a chat, have a cuppa.  Come and join us ....
Posted by Unknown at Thursday, September 17, 2015 1 comment: